Work has commenced on the Wiggins Island Rail Project (WIRP) Stage 1 which includes duplicating 18 km of track between Rocklands (near Gracemere) and Stanwell on the Blackwater Rail line.

Leighton Contractors have been awarded the contract to carry out the earthworks for the rail duplication which has been designed to carry 1.7 km long coal trains.   These trains will contribute to feeding the new Wiggins Island Coal Export Terminal being constructed in Gladstone.

Part of the project will involve building of three new rail bridges at the Burnett Highway,  Four Mile Creek and Neerkol Creek.

When the Blackwater line is fully duplicated an extra 8 trains  per day will pass along the rail line adjoining the Gracemere Industrial Area.

Malchi and Somerset Road Rail Crossings will be closed permanently once the Gracemere Overpass is opened for traffic.  These crossings have been identified as the two most dangerous level crossings on QR National’s rail network.

More information is available on the QR website here: www.qrnational.com.au/wigginsisland 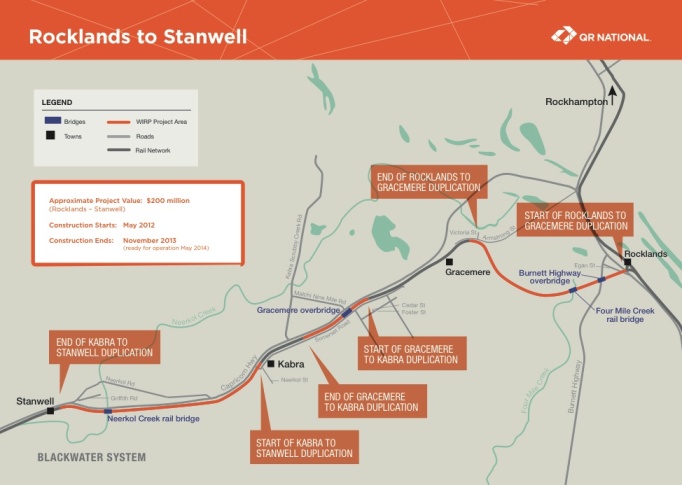