Work has now been completed along the track-side of the rail line at Somerset Road from close to the Somerset Road Rail Crossing along to Macquarie Street and further east. Approximately 1.4 kms of non-slip walkway grating has been laid at the Gracemere location.

QR National will install more than 80 kilometers of the safe trackside walkway across 98 sites on the Central Queensland Coal Network – providing safer working conditions as the crews change at set crew change locations.

Locations where the safe trackside walkways are being installed or completed include :

The work is contracted to Specialised  Track Services who are using local Gracemere contractor, Schwarz Excavations, to carry out the work. It is great to see a local business winning contracts throughout Central Queensland on this project.

The new walkway is made of a fibreglass reinforced plastic grating, coloured safety yellow and has glow-in-the-dark connector plates that provide delineation of the walkway in the dark to make crew changes at night much safer. Train crews are reporting how much easier this makes their crew change over. Each section is 1.2 metres in width and 3.6 metres in length and connects effectively to create as long a walkway as is required.

The Somerset Road crew change area which is the start of the dual track through Gracemere to the south, has also been a siding for parked coal trains over many years, the dual lines will then continue from the Somerset Crossing west to Stanwell where the lines have already been duplicated and on out to Blackwater.

Read more about the walkway in the  QR National Media Release. 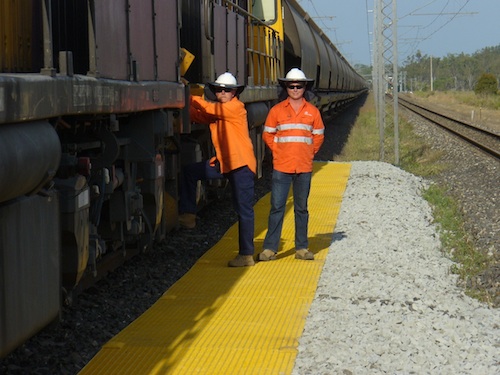